Hue served as Vietnam's capital under the emperors of the Nguyen Dynasty from 1802 to 1945, and the city’s regal past can still be seen inside the walls of the Citadel and the Imperial City. Both were heavily damaged during the Tet Offensive of 1968 when the Communists took the city from the South and held it for 3 weeks, but now thanks to UNESCO funding, much of the City is being faithfully restored to its former glory.

8h00 depart to see the Imperial Citadel- an impressive complex, first built in 17th century based on the ancient practice of geomancy.
You will also have time to visit the completely different Khai Dinh royal burial place, flanked with a grandiose dragon staircase leading to its European-like castle built in the 1930’s. Khai Dinh was the father of Emperor Bao Dai, and his tomb was completed in 1931. During the early 60s, Hue was the site of violent Buddhist demonstrations against the repressive Diem regime.
After lunch  take a boat ride on the Perfume River and visit some of the more interesting sites of Hue – Thien Mu pagoda and the Minh Mang tomb’s. 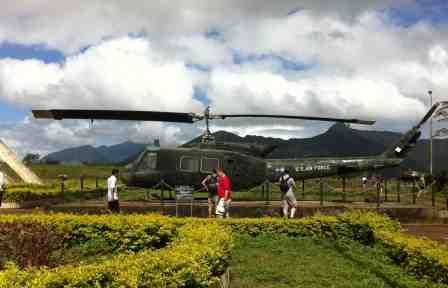 1 Day Back to DMZ